Graphite and the renewable energy revolution 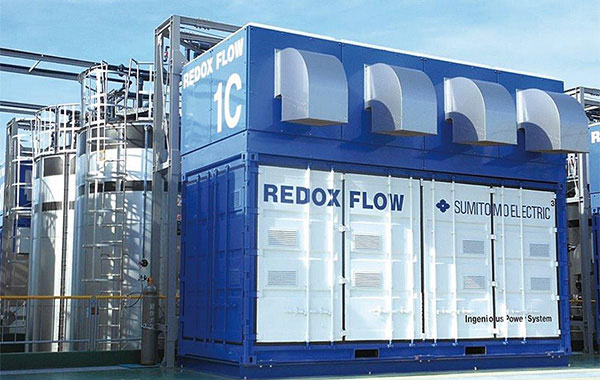 Intermittent energy sources such as solar and wind power are an increasingly viable option for small and large-scale power applications thanks to improvements in energy storage.
Lithium-ion batteries are currently the most popular power source for electromechanical energy storage applications, but these have relatively short lifespans and aren’t easily recycled.
Redox flow batteries (RFBs), on the other hand, provide an attractive and cost-effective alternative to these limitations. A type of rechargeable flow battery, RFBs employ a process of reduction and oxidation—involving the transfer of electrons—which stores excess energy for later use.
All-vanadium RFBs (VRFBs) are the most commercially available and researched of the flow battery systems. They have long life cycles of 10 to 20 years, can be reused up to 10,000 times and discharge 100% of stored energy without damaging the cells’ overall performance.
Although more expensive than lithium-ion and sodium sulphur batteries, VRFBs are easily scalable and the process of charge and discharge is completely reversible.

Meeting the demands of renewable energy

A promising solution to the problem of balancing unpredictable power generation with demands on consumption, VRFBs are an attractive method of storing energy for a variety of needs, from utility-scale grid stabilisation to small-scale domestic applications.
A recent study suggests that solar and wind energy is cheaper than three-quarters of the coal-fired power in the US. With an increase of inexpensive renewable energy technologies comes an increase in intermittent energy, and more flexible storage systems are needed to stabilise electric grids and prepare for times when there is no wind or sun to supply the necessary power.
VRFBs could be the cost-effective, eco-friendly route to balancing electricity supply and demand. They release no harmful emissions and are flexible and consistent enough to balance power grids—promising energy-saving potential and a positive impact on the environment.
Not only are they flexible, stable and scalable, but VRFBs are notably more robustand less flammable than their lithium-ion and lead-acid counterparts; since VRFBs only use one electroactive element instead of the usual two, there is no risk of cross-contamination of ions in the electrolyte.

Unlike conventional batteries with fully integrated storage architectures, VRFBs store electricity as chemical energy in two large tanks containing vanadium-based liquid electrolyte solutions of opposite charge—a negative anolyte on one side, and a positive catholyte on the other—where electrolyte is pumped from one tank into the corresponding half of a central cell.
An advantage of this design is that, should a fault occur in the system, the flow of the electrolyte can be stopped without causing excess damage to the battery.
In the central tank isa porous ion exchange membrane which separates stacks of anode or cathode electrodes.The electrolyte flows both ways through the membrane, depending on whether it is charging or discharging.
While storage is occurring, electrons are transferred from the electrolyte through the membrane and stored at the anode. The chemical reactions and direction of the electrolyte are reversed when the battery discharges. The stored electrons travel back through the external circuit to the cathode, converting the chemical energy in the electrolyte into electrical current.
Keeping the electrolyte and cell stack separate allows for flexible design and scalability, as the battery’s energy capacity is determined by the volume and concentration of the electrolyte while the number and size of electrodes in the stack is ultimately what influences its power.
This means that energy and power are completely decoupled in VRFBs. This ability to change the dimensions of the power and energy capacity independently of one another means flow batteries can be easily scaled up for larger applications at a much lower cost than other battery systems.

Graphite felt as an electrode material

The performance of VRFBs largely relies on the electrode, which requires high electrochemical activity to promote the charge transfer of redox couples.
Due to the potentially corrosive environment in flow batteries, only materials with certain qualities—strong chemical resistance and high electrochemical activity toward the redox reactions—can be used as VRFB electrodes.
As such, carbon-based materials such as graphite and carbon felts are the predominant electrode materials for VRFBs, favoured for their low cost, conductivity, permeability and electrochemical stability.
Paul Lancaster, managing director at graphite specialists Olmec Advanced Materials, said: “Graphite and Carbon felts have a versatile list of operational characteristics, providing a low-cost and lightweight but efficient performance in redox flow batteries.
“They have manyof the qualities you could want from an electrode, ticking the boxes for strength and chemical stability as well as conductivity.”
Feltscan, however, suffer with low electrochemical activity, poor wettability and small specific area, hinderingits current density and ultimately affecting voltage efficiency.
Research suggests that treating graphite felt electrodes for VRFBs with electrochemical oxidation increases the electrode’s specific surface area, and improves electrochemical performance as a result.

Despite their cost, performance and mobility benefits, VRFBs are complex systems and as such have faced several challenges in development, mainly issues of low specific density in comparison with other batteries.
For flow battery technology to progress and become more marketable, the compatibility of membranes and electrodes must be given more attention, while the overall design and management of cells and stacks also needs improvement.
Lancaster said: “It’s important to understand the operational life and environment necessary parts like electrodes will be subjected to so that the graphite can be machined and treated properly.”
Research into developing the performance of VRFBshas shown that treating the surface of graphite electrodes—through processes such as thermal treatment, metal doping or chemical treatment with sulfuric or nitric acid—enhances the energy efficiency and reaction kinetics of VRFBs.
By improving the capacity to store and discharge surplus energy, VRFBs can become a more economically viable technology and deliver much-needed electricity in periods of high demand or during blackouts caused by natural disasters.