5G Wireless Technology Is Coming. But not before vital infrastructure upgrades are completed. 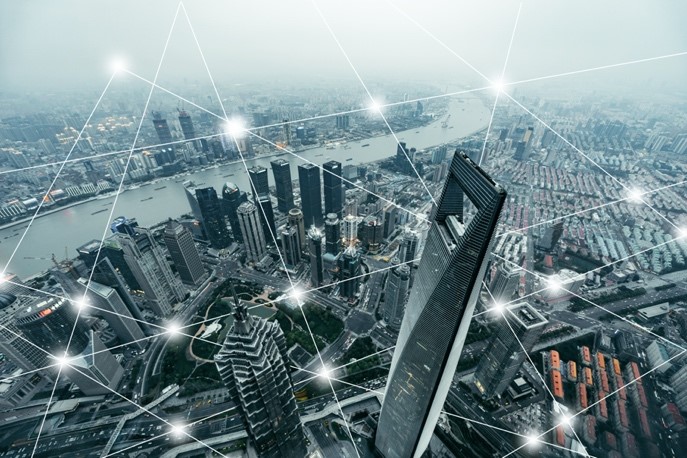 The last few years have seen an escalating buildup of hype around 5G network technology. If you’ve been out of the loop (or under a rock), the story goes something like this: It’s big, it’s coming and it’s going to change everything.
In this case, the sense of drama may actually be warranted. In a 5G world, virtual physicians and in-home exam systems will bring affordable, quality care to even the most remote corners of the world. Sophisticated hologram and augmented reality experiences will open up new avenues of art and entertainment, while real-time data streams will transform industries ranging from manufacturing to agriculture.
“The next generation of wireless has the potential to enable pervasive sensing as billions of devices connect with each other and the cloud, processing massive amounts of data and extracting information for those using them,” says Andrea Goldsmith, a professor of engineering and director of the Wireless Systems Laboratory at Stanford University. “But that promise, the things you see in the news, depends on investing in the development of wireless technology.”
Specifically, those investments include a rethink of how to test and build the communications infrastructure, like cellular base stations, that are underpinning previous wireless generations. This is a process that not only involves deep expertise in building telecom infrastructure, but also the creativity to develop solutions that address some of the more complex requirements of delivering the ubiquitous connectivity promised by 5G wireless technology.
The Other Generation Gap
With the availability of greater speeds and bandwidth combined with the need for smaller form factors, the onset of 5G is pushing the telecommunications industry to get creative as its infrastructure needs grow ever costlier and more complex.
Consider the radios used in 5G base stations: in order to communicate with a wealth of new devices on the network, they carry up to 16 times more channels than their 4G counterparts. As a result, their silicon content is dramatically higher. This makes them heavier and more expensive, with enormous power consumption needs.

Despite these challenges, 5G cell sites will be a deciding factor for the rollout of new, next-generation networks. “Network density is one of the key ingredients of 5G,” says Chris Pearson, president of 5G Americas, a trade organization for telecommunications service providers and manufacturers. “We don’t just need thousands more cell sites. We need tens of thousands.” 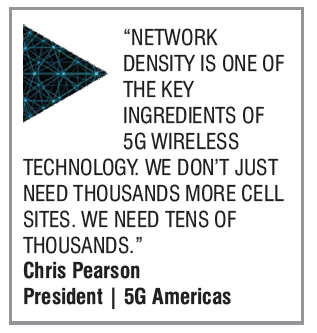 Watching the Waves
When 5G arrives, it will usher in an era of high speeds, low latencies and massive connectivity. While it stands to transform every industry, its impact will be especially felt in urban settings—and will pave the way for tomorrow’s smart cities.
5G essentially comes with two big improvements over 4G; massive multiple input, multiple output (MIMO) at lower and higher frequencies and millimeter wave (mmWave). The latter is especially suited to dense urban environments.

Generally speaking, millimeter wave refers to the band of radio frequencies between 30-300 GHz, where the wavelengths are measured in millimeters. For 5G, the mmWave band is defined as 24-100 GHz by the 5G Standards Body (called 3GPP) with higher frequencies under future consideration.

Millimeter wave technologies for 5G target high frequency bands where there is more available spectrum. The shorter wavelengths at higher mmWave frequencies also translate to smaller antennas and equipment, making it easier to fit more mmWave infrastructure into small urban areas.
Greg Henderson, senior vice president of the automotive, communications and aerospace group at Analog Devices, understands the steep demands placed on telecom companies. “When you multiply those channels, it basically multiplies the content of the base station,” he says. “So the challenge for operators is that they need to be able to accomplish that increased capacity in roughly the same form factor, and at the same cost and power draw that they had in an old 4G base station. This requires a total rethink of the radio system, moving from traditional radio architectures with discrete components and filters, to new, direct conversion ones that eliminate vast amounts of complexity through architecture and advanced software algorithms.” 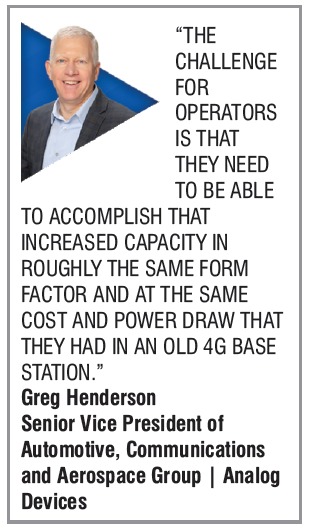 With a long history in technologies like radio frequency and microwave communications, Analog Devices has been a key player in the rollout of each previous generation of wireless. From 1G up through the present day, it has developed crucial hardware enabling increasingly high-speed data conversion and communication that are critical to not just the deployment of new communications networks, but also the test equipment needed to prove out the new levels of performance.
“We’re not just developing components. We’re really trying to solve an entire system-based problem,” says Joe Barry, vice president of communications at Analog Devices. “We have a level of system architecture expertise coupled with a really, really strong portfolio of technology, which allows us to address challenging problems in a very dramatic way.”
The company has applied its experience toward the unique demands of 5G network technology, creating an entirely new communications architecture in the form of a software-defined transceiver. Originally developed for 4G, this technology integrates the complex, even unwieldy signal chain into a single microchip. By doing so, the challenges of size, power and cost in building 5G cell sites—all key practical barriers to adoption—become substantially more manageable.
“We’re using essentially the same physical spaces in these towers, but getting more bits per unit of energy on an order of magnitude greater than we did in 4G. So we need to deploy some very sophisticated radio antenna processing techniques,” says Vincent Roche, president and CEO of Analog Devices. “The next phase of 5G will bring some form of edge-based cloud systems to be able to do this dynamic provisioning of services for different types of businesses. So new business models are likely to emerge in areas like Industry 4.0, where 5G could become the bedrock of connectivity in mission-critical factory automation.”
A Better Base Station
Millimeter wave 5G will require a rethink of the base station architecture currently used for wireless communications, with a focus on enabling greater density. Since 2015, U.S. companies have built 30,000 5G cell sites, with many more anticipated in the years ahead.

The Next Inning
With the groundwork laid, 5G wireless technology has the potential to transform—well—just about everything. According to research from Carnegie Mellon University, traffic management solutions enabled by 5G networks could result in a 40% reduction in vehicle wait times and a projected 21% drop in emissions. In the industrial sector, 5G will pave the way for massive IoT, with ultra-low latency wireless connectivity that allows manufacturers to work smarter, faster and more efficiently. By 2022, some research predicts there will be as many as 1.5 billion IoT devices, with use cases in everything from fleet management to agriculture. Others put the number as high as 64 billion by 2025. 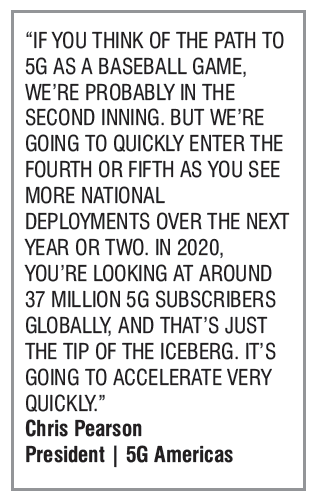 The network connecting cellular towers to each other and to the global communications network must also be upgraded to enable the full promise of 5G. As these systems accommodate increasingly higher data rates over longer distances, precise control is required to manage the complex sequence of lasers, modulators and detectors. Here, Analog Devices’ highly integrated precision electronics and power solutions play a central role in enabling optical networks to reach speeds of hundreds of gigabits per second while consuming less power than previous generations. In addition, Analog Devices’ advanced clocking products enable the enhanced synchronization needed to meet the precise timing requirements of 5G networks.
The 5G City
5G and mmWave will play key roles in making tomorrow’s smart cities a reality. These technologies could produce as much as $160 billion in savings through reduced energy usage, fuel costs and more.

As businesses cross the 5G rubicon (or reach the ninth inning, to use Pearson’s analogy), partners like Analog Devices already have an eye on what’s next in communication. “5G is just the beginning, and we’re looking forward to what lies beyond it—when we have 6G or 7G communication at tens of gigabits per second and extremely low latencies,” Henderson says. “The requirements for these systems are just starting to become apparent. But what is clear is that they will require, yet again, a complete re-architecture to unlock the full extent of their potential.”