When the Bluetooth® 5.0 specification launched in 2016, it provided significantly higher data rates than previous standards and paved the way for the introduction of a number of Bluetooth Low Energy (BLE) networking features, particularly those with an emphasis on the emerging requirements of Internet of Things (IoT) applications. Just a year later, on July 31, 2017, the Bluetooth mesh Device Properties 1.0 was launched, enabling the provisioning of Bluetooth-based many-to-many communications. The mesh specification allows for up to 32,767 (215) nodes, making it well-suited for deployment in a wide range of IoT and smart home applications in which there are large numbers of individual devices that need to be connected.

Rather than restricting communications through a single network hub or star topology, mesh networking allows messages to be sent and relayed through multiple nodes. Mesh networking also enables addressing and controlling multiple devices in a network simultaneously. The Bluetooth mesh approach extends the network’s physical range beyond Bluetooth distance limitations, adds network resilience through redundancy, and offers the ability to significantly scale deployment. The mesh can continue to extend the operating range, overcoming the range limitations encountered with a traditional Bluetooth device. Also, the very nature of messages relayed across the network “fabric” means there is no single point-of-failure, which gives it a self-healing capability. 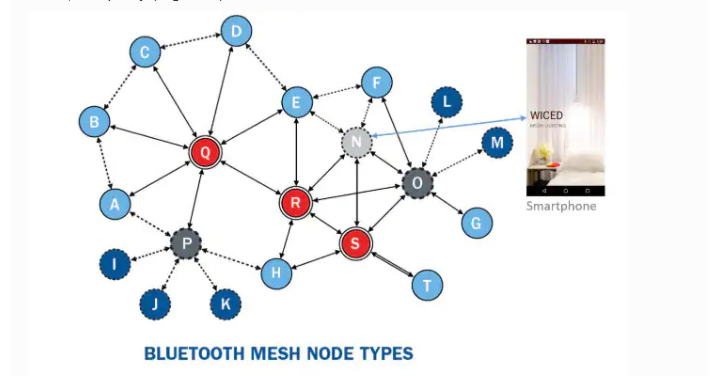 The mesh operates using a broadcast-to-all or “flooding” technique to send messages to every node within the network until the message reaches its destination. A message can target an individual node, a node group, or all nodes. For instance, a group address can be used to turn on all the lights in the dining room, with each light receiving the command with virtually no latency. A publish and subscribe technique links different node types within a mesh network. For example, the group of lights in the dining room “subscribe” to the on/off commands “published” by the light switch(es) located in the room.

Embarking on the design of a new Bluetooth mesh-based product can be daunting for even the most seasoned engineer. The Bluetooth Special Interest Group (SIG) helps by publishing a list of suppliers of modules and system-on-chips (SoCs) that have passed the Bluetooth Qualification Process, but beyond that, the engineer will have a host of questions relating to component specifications, software stacks, development tools, and reference designs. In that context, Cypress stands out as a supplier that has the answers and provides all the critical elements to enable completion of a Bluetooth mesh design.

Cypress provides a comprehensive list of devices, reference designs, and helper applications for implementing all node types, making it possible to speed the prototyping, development, and testing of Bluetooth mesh products as quickly and cost-effectively as possible. Cypress’ fully certified modules and SoCs, firmware, and development kits remove the complexity of working with the underlying protocols of the mesh stack specification, leaving the development team to concentrate on bringing the end product to market in the shortest time possible. An example is the range of Microsoft Windows, Android, and Apple iOS helper applications that provide prebuilt source code examples to further speed development of mobile applications that interact with the Cypress mesh product lineup (Figure 3). 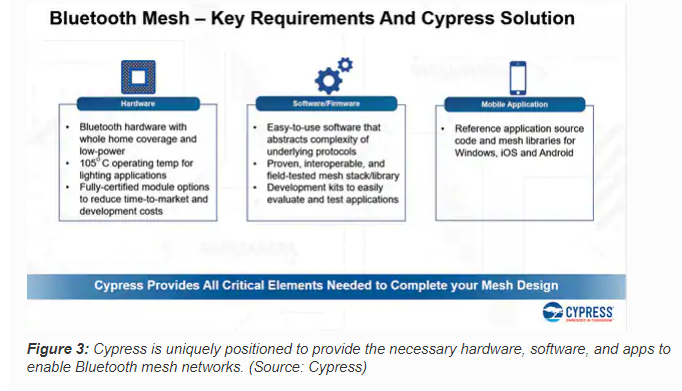 Added to that, Mouser’s state-of-the-art global distribution and same-day shipping capabilities mean that Cypress products can typically be on the engineer’s bench the day after ordering.